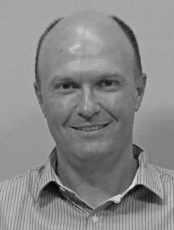 Josh graduated with a degree in Physical Therapy from Northeastern University in the spring of 1997. While at Northeastern, he completed an internship with OA as well as a rotation in outpatient orthopedics at RHD Medical Center in Dallas, TX.

Josh joined Orthopedic Associates in August of 2014, working out of the Windham office. Prior to joining OA, he worked at Bath Iron Works treating acute and chronic musculoskeletal injuries. While at BIW, he became a Certified Hand Therapist while also achieving certification in ergonomic assessment.

Josh has attended multiple courses over the years in the management of upper and lower extremity injuries. He has also completed several courses in splinting the upper extremity. He believes in a patient-centered active approach to rehab while utilizing manual techniques to restore motion and reduce pain.

Josh resides in Gray with his wife Judy and children Alie and Kyle. Outside of work he enjoys running, biking, and spending time with his family.